The skeleton of a foot consists of 28 bones. The foot bones can be divided into following groups: tarsal bones, metatarsal bones and phalanxes. 20 muscles and over 114 tendons and ligaments ensure the required flexibility and stability of the bones to each other. A fine nerve and blood vessel network supplies the surface and deeper muscles above and below the foot.
Long story short, this is why you need the new ergonomic NTT and the choice of four different sizes to find exactly the NTT which fits to your feet.
This year the economic EVA pad in combination with the toe padding is the guarantee to always have the right grip, an optimal pressure distribution with maximum comfort.
A stiff strap connection keeps your feet at the right place and keeps the whole strap closed in any conditions.
This new ergonomic NTT gives relief to overstressed nerves and prevents fatigue and pain, your feet will get less tired and you?ll stay on the water longer. The ergonomic NTT footpads in combination with the adjustable heel pads help to reduce pressure on the heel and even avoid shocks on the entire body, helping alleviate long-term foot, back and knee pain. An additional nice little gimmick is the possibility to stick the screws of the pad on the bottom of the pad, so you don?t lose them whilst travelling.

The new Entity Ergo is a tailor made binding system with a perfect fit to your foot. During a long developing process we realized, the most accurate way to measure feet for a Kiteboarding binding, is to measure the sole of your foot without toes. To find the best fitting size of your Entity Ergo, please measure from the top of the midfoot, between the 2nd and 3rd toe, till the end of the heel. As the perfect fit is very important for your kiteboarding experience, please follow this measurement advice and also check the graphic.
Duotone Kiteboarding Entity Sizefinder 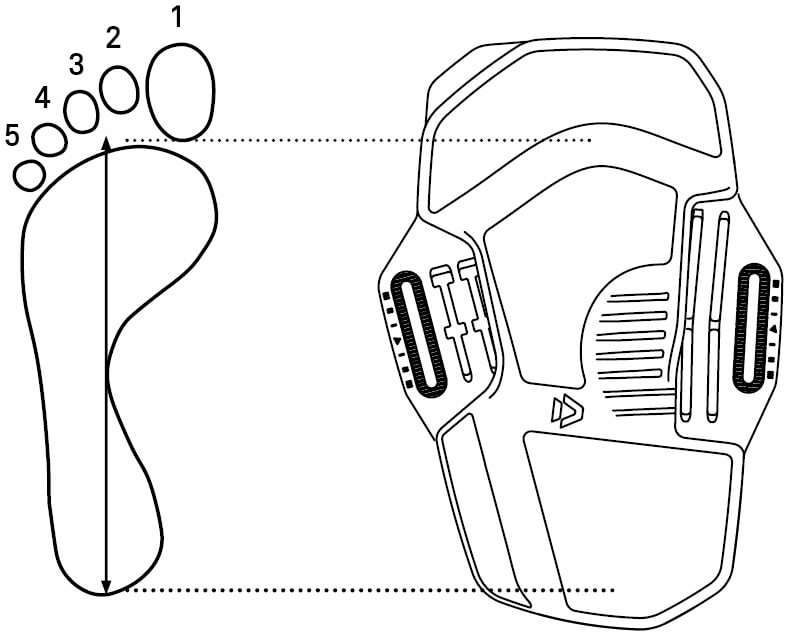 The stance - which position should I fit my boots or straps in?

taller people need a wider stance than shorter people. To find your stance width, jump forward and land in a comfortable squad position.

if you suffer pain in shins; move position towards heels for easier edging.

if suffering pain at the inside of knee; move angle closer to parallel. Look for your natural foot angle when you squat.